This is part 2 of my 3 part series on getting started with Substrate and Ink.

In the previous post I just explored the documentation, and never actually got around to writing any smart contract code. But I ended by coming up with a game plan, which I intended to follow now:

Spoiler: we’re not actually going to end up writing a contract in this part either, but we’re going to learn useful info about substrate development. We’ll definitely get to Ink in part 3.

Creating a blockchain with substrate

Now I’m going to the Substrate Developer Hub and following those docs.

“Welcome to the wonderful world of blockchain development with Substrate!”

“In Substrate, runtime code is compiled to Wasm and becomes part of the blockchain’s storage state - this enables one of the defining features of a Substrate-based blockchain: forkless runtime upgrades.”

So you customize a substrate blockchain by writing its logic in WASM, which is itself stored on-chain. That’s fun.

There are several ways to build a substrate chain, but the easiest is to use the “Substrate Node” right out of the box, with a little bit of custom configuration. For our purposes, this seems right.

Oh, there’s so much documentation here. It seems impossible to follow it in any linear way. That’s ok - at least there are docs.

For running a Substrate Node, the docs indicate to use the two tutorials:

I figure we’ll do the first, then the second if we need to.

I’ve only just started reading the top-level docs on substrate.dev though. Looking at the sidebar I see lots of interesting topics I want to know more about, but for now we’ll go straight to the tutorial.

There’s a one-liner for setting up development tools:

but reading about what it does, I should already have everything it installs on my box. I skip that step…

The next step is to clone a “node template”:

Per the docs I update my stable and nightly Rust toolchains, and add the wasm32-unknown-unknown target to the nightly.

Now I can build the template with cargo build --release.

While we are building…

The readme for substrate-node-template is informative.

From a very naive guess, it looks like a simple substrate node is divided into two parts:

There’s also a “pallets template” that defines some mysterious macro magic, and is imported by the runtime. Best to ignore that for now I think.

None of this code looks simple - it’s all a bit panic-inducing, really, but I’m sure with enough time I could more-or-less understand it.

Building a custom substrate runtime is complex enough that it requires a macro.

A big macro. Look at this syntax:

I kind of can’t even guess what this might expand to, even though the syntax begins with “pub enum Runtime …”. But even though that’s alarming, it’s also what’s so great about macros: you can wrap up some very complex constructions into something that is at least simple on the surface.

Much of the rest of the runtime file is dedicated to defining assocated types on Runtime for specific pallets, like

I run into a build error:

Because this is a Rust typechecking error, I’m guessing this is a problem related to nightlies: the tutorial has told me to use just “nightly”, and probably I need a specific nightly.

I see that the readme for substrate-node-template has a different cargo build invocation than the tutorial:

This is telling the substrate build scripts (presumably) to use a specific nightly when building the WASM parts of the runtime.

I install that nightly and its wasm target:

and run the new build command:

A different error. This is surely because I didn’t run the getsubstrate.io setup script, thinking I had all the development prerequisites installed. Fortunately I’m familiar with this error and know I need to install clang/llvm development packages.

While my build suceeds, my partner’s (who is also following along) does not. She continues to get the same “type annotations needed” error. After investigation we discover that while I have the “stable” toolchain set to the default, she has the “nightly” toolchain as the default.

So on her computer we run

There must be a type inference regression on nightlies that is causing the build to break.

I should report this to the Rust bug tracker… but I’m tired of diversions and want to press on. Sorry.

The build takes about 15 minutes, in release mode, on my fairly puny machine. Thanks, Rust.

I have my own blockchain now, yay! Thanks again, Rust.

These would have been difficult problems to overcome for someone not already familiar with nightly Rust development, and I can tell the Substrate docs are trying to be friendly to non-Rust devs. On the other hand, someone new to Rust would probably not have tried to skip steps like I did, so wouldn’t have hit as many of these challenges.

Time to continue the “create your first substrate chain” tutorial…

Next, the tutorial wants us to install the front end template, which is of course JavaScript.

I don’t think I need this right now, since I’m interested in writing contracts, but I’ll need it eventually, and I’m curious what the front end is like, and I want to follow the tutorial as written (especially as I skipped steps in the last section to my own detriment).

I’m always a bit apprehensive whenever I have to build / run a JavaScript project. That world feels alien.

Ok that was painless.

The next page in the tutorial, “Background Information”

is a bit out of place here, just kind of trivia.

Following along on the next page, “Interacting with Your Node”:

The instructions say to run

but I personally don’t like to simply run binaries out of the target directory, so I try:

The output is exciting:

Those emoji are so silly, but I love seeing them. I can imagine they make scanning the log easier once you are familiar with them, so maybe not as silly as they look.

I am relieved that Substrate makes it easy to run a temporary devnet with a single command, no generating keys, creating config files, creating directories. In my (admittedly limited) experience NEAR also makes this easy, Nervos does not, and the proper development workflow for Ethereum is just not clear at all.

Every blockchain should have a simple command to spin up a local devnet.

I note the output line

I don’t know much about Prometheus, but do know it’s for collecting metrics. I hope I can open that port in a web browser and see something interesting.

Now I run the frontend with yarn start:

Now I should be able to open a web browser on port 8000 to see the substrate GUI, and port 9615 to see the metrics.

I’m running remotely on EC2, so I need to exit my shell and reconnect with the appropriate port forwarding in order to tunnel those ports to my local computer:

I try to open localhost:8000 on my local computer and see an error:

Awesome. I’m guessing that I need to forward another port, probably the RPC port for the substrate node.

Based on the Substrate logging output, I establish a new ssh tunnel, adding port 9944 as well:

Now I see the frontend. 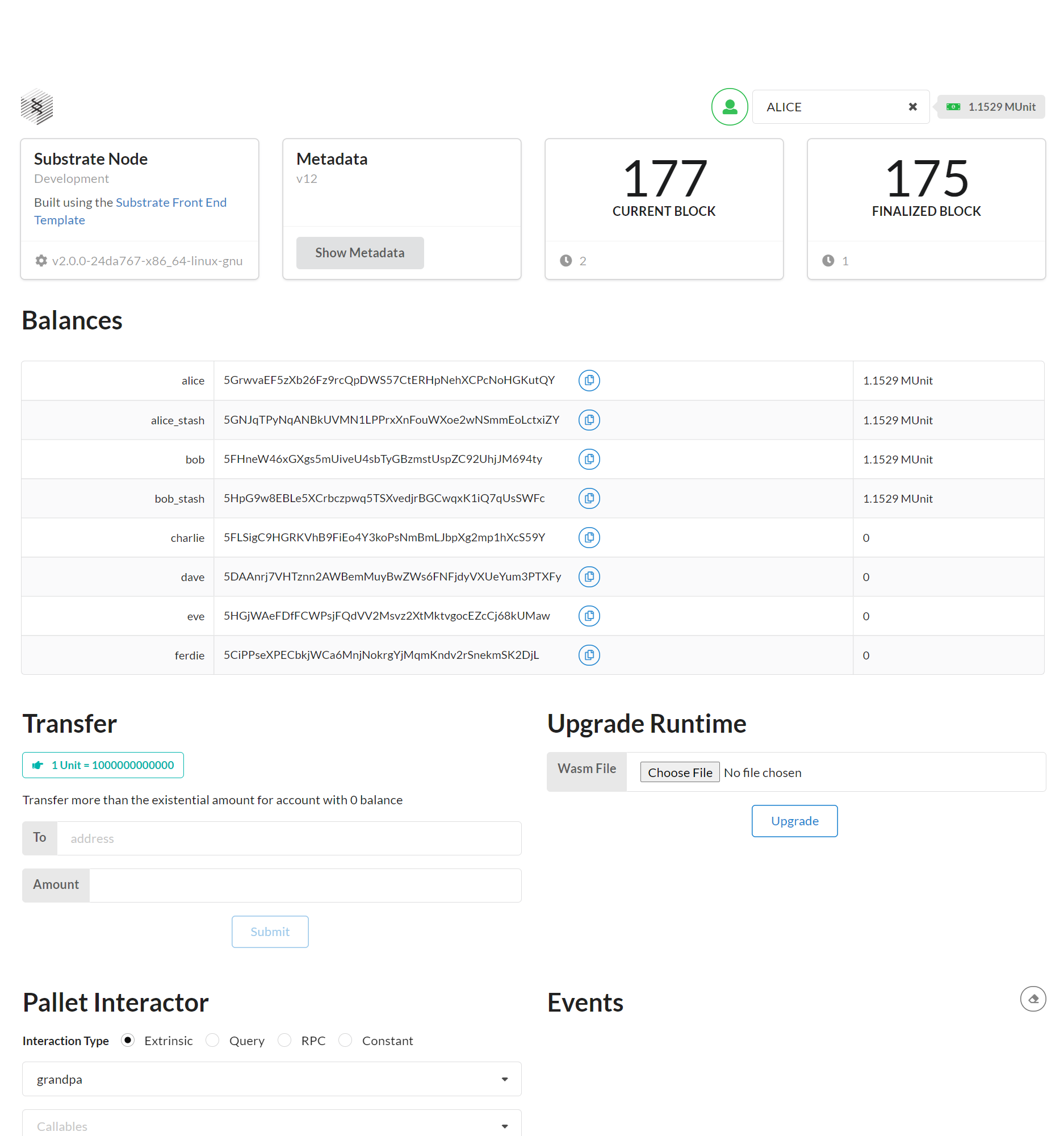 There’s so much fun-looking stuff to mess with here, but for now I’m not going to.

Really, this is a pretty impressive experience for a newbie - lots of interesting things to wonder about and play with, from the docs, to the node logging, to the default UI.

I attempt to navigate to localhost:9516, the prometheus address, but it just returns “not found”, so I guess that’s not a prometheus UI, just a service port of some kind.

Some googling reveals that I can get the server metrics from

but it seems if I want a nice metrics frontend I need to do some more work.

I note that, compared to NEAR, it has taken me quite a bit longer to get started actually writing a contract, since I have first had to learn how to build my own blockchain. I don’t particularly mind this, as building a substrate blockchain has been interesting, and I am excited about the possibilities, but it is a notable point of comparison.

(In the next part, we’ll see there was a path to getting started with substrate smart contract programming that didn’t involve building a custom substrate node first, I just didn’t find it directly).